In 2003 after I graduated from college I went to live in France for the second time and found myself living in Tours, about an hour and a half south of Paris. I decided to take a day trip there while I was in Paris and didn’t know what to expect. A friend of mine, who also used to lived in Tours kept telling me that it would probably be emotional to go back but I couldn’t see why it would be.

My train pulled up to the station and as soon as I walked out it hit me, like someone had thrown a giant bowling ball into my stomach. It was surreal to be back after 10 years. The streets were exactly the same besides a few new stores that had popped up but I was SUCH a different person. Back then, I had just graduated college and the world was at my fingertips, I had no idea where life would lead me.

Now being back it was really crazy to think how much I had changed from the last time I was there. I had made new friends, had multiple jobs in NYC during my 9 years there, dated a few different people and had quit everything to travel these past 6 months. And although I was a different person it was ironic to think that I was also in the exact same boat now as I was then, because I have no idea where life will take me next. Yes he was right, it was certainly an emotional experience. Without noticing, I found myself walking towards my old apartment. I passed the cafes, patisseries, bars and bakeries that I used to frequent. Memories came flooding back of funny stories and good friends that I met while I was there. Tours will always hold a special place in my heart because I met 2 of my very best friends in the world here. We all came from different parts of America and when we said goodbye we each knew that we would probably never see each other again. A year later though, we all found ourselves in NYC! Both Mike and Carrie have been amazing friends and there for me through thick and thin. Carrie is getting married this September and I’m actually going to be in her wedding. Some friendships really are meant to be!

It’s kind of a funny story on how I ended up living in Tours. After college, I went back to France to teach french in a middle school. The city that I was assigned to was called Vendome and it was in the middle of nowhere. I stayed there a few months but was miserable because there was absolutely nothing to do and no one my age to hang out with. One of the teachers at my school told me that I should visit Tours one weekend because it was only an hour away and it would help me get out of Vendome. When I arrived and stepped out of the train station for the first time, I literally heard a choir of angels singing in my head. This city was beautiful and I needed to move their ASAP! I walked into the first store I saw and bought a ton of newspapers to see if there were any apartments for rent. At the time my french was not the best but it was do or die time, I needed to live here and I needed to find something before my train left to go back to Vendome later that afternoon. “Survival of the fittest” at it’s best!

I sat down in a cafe, ordered a cafe au lait and started to dial a list of numbers in my broken french. It was so intimidating and scary to say the least. Speaking in a second language was already a challenge but speaking over the phone in your second language is even worse! Every number I called told me that they had just released the apartment to someone else. I was feeling hopeless but continued on. I had one number left on the list and crossed my fingers and dialed. An old lady picked up and I asked her if her apartment was still available. She told me that it had just been leased out but I think she sensed my disappointed from the tone of my voice and felt bad for me. “I’ll tell you what”, she said, “why don’t you come to my apartment and we can discuss some options, I think I have an idea for you.” An hour later, I was in a beautiful apartment of a complete stranger. She told me that a landlord friend of hers had mentioned a few days ago that he was going to put one of his studio apartments up for rent and that it was completely furnished. She didn’t know if he had found someone yet but she was willing to call him for me.

The man met me that afternoon and took me to the apartment on the very top floor of a 3 story walkup (which really means 4 stories in France since they count the first floor as 0, the second floor as 1, the third floor as 2 and so on and so on). It was a tiny studio with just a little window sticking out from the top of the roof, it was filthy because the current tenants were still there. The bathroom was in the hallway and shared with the other 2 neighbors and my kitchen and shower were in a separate room across the hall that needed to be locked at all times. Yes, a shower and a kitchen in the same room!

The top floor of old apartments in France are called “chambres de bonnes” and they were originally used as the maid’s quarters, so this explains the setup. I looked around and within 30 seconds I turned to him and said, “I’ll take it”. The next weekend I moved in and started commuting to work an hour away. I only worked 3 days a week at the time so it really wasn’t a problem and it turns out that many of the other teachers at my school also lived in Tours so I would take the bus with them or they would drive me.

To this day, whenever someone asks me, “what was one of your biggest accomplishments up until now”…..I always think back to this moment. It may sound small but being in a foreign country, barely speaking french and having to call up people to try and find an apartment all on my own within a span of 5 hours still makes me smile and think, 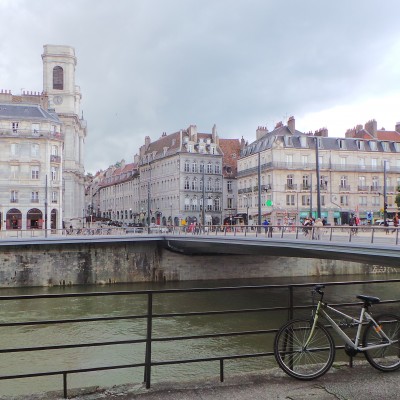